I cannot think of a better way to begin my 100th Headmaster’s blog than with the words, ‘The Fulham Boys School is finally home’. But in typical FBS fashion, whereas for so long we have had boys waiting for a building, now we have a building waiting for boys!

As excited as I am, after all these years, I am also sad boys and parents will not get to say goodbye to Gibbs Green and Beaumont Avenue. So in this milestone blog, I want to give you five things to think about as we move, with five words for each. 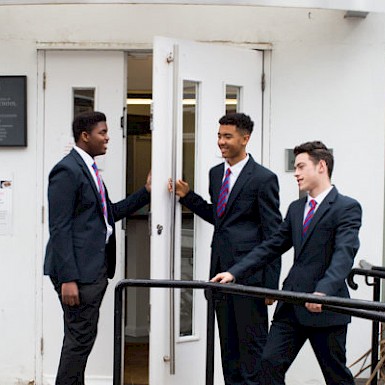 The story goes that Winston Churchill was invited back to his old school Harrow after the Second World War to make a speech. As the crowd sat in eager anticipation, he stood up, said, ‘Never, never, never give up’, and then sat back down.  I very nearly adopted the same approach with this blog…

Eleven years ago The Fulham Boys School was just an idea in the enterprising, visionary minds of the Founders (what a moment this is for them; we owe them so much). Three years later I joined them from Wales, spent a year with a laptop in an office above a church, and among other things, visited primary schools, met with the council, DfE and churches and made my first speech as Headmaster at an open evening in the Fulham Palace surrounded by FBS penguins and more branded water bottles than I could count.

As the year went on, we recruited fifteen members of staff who had taken a huge risk by leaving their secure jobs and salaries; a risk that became all too real when they were told in July that the school wasn’t going to open because of issues over… site. Similarly, parents were told their sons could not go to the secondary school they had been promised. FBS seemed dead in the water and the pressure was on to throw in the towel https://player.vimeo.com/video/99912720. Spurred on by parents and boys, we fought for a school we believed in https://vimeo.com/99928050. Against all the odds, we did it https://vimeo.com/139904259.

Just imagine if the governors and founders had lacked their incredible vision and drive. Imagine if the teachers and support staff hadn’t stuck with us. Imagine if our first Fulham Boys and their parents hadn’t believed in us and demonstrated the risk-taking, make it happen, anything is possible attitude they did. Imagine if FBS had never seen the light of day because of temporary uncertainty over permanent site! This borough wouldn’t now have an academic boys’ school open to all… it wouldn’t have boys from different backgrounds rubbing shoulders with each other and all demonstrating the same high standards.

Let us never forget the spirit, energy, vision, strategic thinking, well-reasoned arguments and dignity that got us to this stage, and whatever comes our way in the next phase, let’s ‘never, never, never give up’.

2. Thank you for the days

Take a moment to look back and be thankful for our days on Gibbs Green and Beaumont Avenue.

Having to never give in, never give up, never lie down and never know when you’re beaten, just to get out of the school gate. (I mean, who won’t miss getting to that old green gate, hearing Mrs Barton say ‘pull the gate, pull the gate, pull!’ Then having to walk all the way back to reception to be told in order to be let out you need to pull the gate).

The walk through a housing estate to get from Music to Maths. Cement mixers in classrooms during the first two weeks we were open. The boy who left his sports kit in school over the first Christmas holiday only to find a mouse in his rugby sock when he returned in January.The marquee and chandeliers we brought in for our opening ceremony and then used as a waiting room for parents during the Year 6 CATs tests. The other marquee and chandeliers we brought in as a temporary dining hall. The swing. The swing rules. Lockers. Locker keys. The photocopier. The internet. The flag. Infected. Mr Kellie, Frankie and the bird.

The Fulham Road will be our home, but the North End Road is where we grew up. It has been the place where we carved out our distinctive ethos and character, stood like granite in the eye of many storms, phlegmatic under intense media spotlight, and a place we learnt to be enterprising, adaptable, resilient and make the best of every situation. The discovery of the mannequin factory and its transformation in just seven weeks by Mark Coward and his team into a school with an assembly hall big enough to fit the whole school in, classrooms, computer rooms, dining room, kitchen and massive reception area, was nothing short of incredible.

4. You’ve got to take yourself

The new site is amazing and ushers in the start of a new phase in our history. But you’ve still got to take yourself to it. You can’t get away from you. So use this historic moment to reflect, take stock, learn from mistakes, put things right, ask for help, start afresh, resolve to have the highest ‘Standards, Standards, Standards’, to ‘Think, Question, Kind’ and possess a ‘Can do attitude’.

It has been a blast. We will never forget you.