Participating in sports teaches young adults how to compete in the real world. By the time they graduate into the workforce and other areas of life, they will have the skills of discipline, perseverance, teamwork and organisation instilled in them.

All boys in Sixth Form will participate in a sports afternoon on a Wednesday. We also offer tennis, volleyball, basketball, fitness and boxing for those who want to take a more recreational approach to sport. 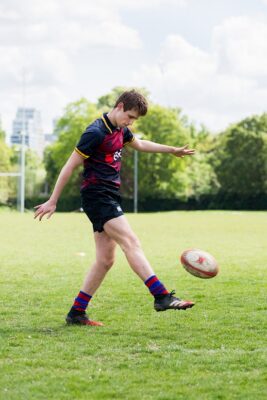 We are extremely proud of our growing Rugby Provision. As a school we enter the National Vase and the Middlesex Schools Shield, where the final is played at Allianz Park. Sixth Formers are also able to benefit from our working in partnership with Ealing Trailfinders Development Player Pathways.

In Football we compete in the National Cup, Inner London Cup and the QPR League, where the final is played at Loftus Road. We have an ongoing relationship with QPR and Fulham Football Club where Sixth Formers will be a part of their development academies.

The school works in partnership with Fulham Reach Boat Club. We host the Hammersmith and Fulham inter-schools regatta, have teams that aim to qualify for the National Schools Regatta at Dorney Lake and take part in heads up and down the Thames.

We are still expanding our cricket programme and we now have established links with Roehampton and Fulham Cricket Club to take our cricket programme to the next level. Along with these competitions we have a Saturday morning programme where we test ourselves against some of the best state and independent schools in London.

This website uses cookies to improve your experience while you navigate through the website. Out of these, the cookies that are categorized as necessary are stored on your browser as they are essential for the working of basic functionalities of the website. We also use third-party cookies that help us analyze and understand how you use this website. These cookies will be stored in your browser only with your consent. You also have the option to opt-out of these cookies. But opting out of some of these cookies may affect your browsing experience.
Necessary Always Enabled
Necessary cookies are absolutely essential for the website to function properly. These cookies ensure basic functionalities and security features of the website, anonymously.
Functional
Functional cookies help to perform certain functionalities like sharing the content of the website on social media platforms, collect feedbacks, and other third-party features.
Performance
Performance cookies are used to understand and analyze the key performance indexes of the website which helps in delivering a better user experience for the visitors.
Analytics
Analytical cookies are used to understand how visitors interact with the website. These cookies help provide information on metrics the number of visitors, bounce rate, traffic source, etc.
Advertisement
Advertisement cookies are used to provide visitors with relevant ads and marketing campaigns. These cookies track visitors across websites and collect information to provide customized ads.
Others
Other uncategorized cookies are those that are being analyzed and have not been classified into a category as yet.
SAVE & ACCEPT