Sits on the Education Committee and is the Safeguarding Governor 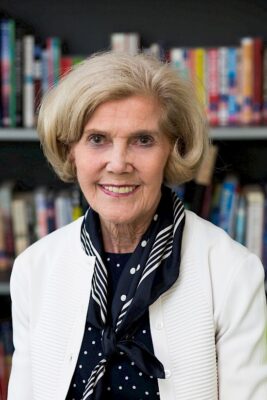 Elizabeth took an honours degree in History at Kings College London, then joined Unilever as a Management Trainee. On marrying, she went abroad for 17 years, training to teach and teaching English as a foreign language in a variety of different colleges for the British Council.

On returning to England Elizabeth was appointed Deputy Head at Feltham Community School, Hounslow and subsequently moved to The St Marylebone CE School as Headteacher. The school focuses on outstanding teaching, which is seen as the foundation of the school’s success. The school was named by the Mayor of London as first in its group of 56 similar schools and a member of the Mayor’s Gold Club.

St Marylebone is now one of the Outstanding Academies, one of the original 100 Teaching Schools and has opened a Free Special School meeting the needs of pupils with Speech Language and Communication Needs.

Elizabeth retired as Headteacher in 2014. She was appointed an OBE for services to education in 2003.

Elizabeth became a governor of FBS in 2014. She is a member of the Education Committee and is the safeguarding governor.