As a teacher of English, I spend the vast majority of my time reading, writing, and thinking about other people’s words. Therefore, when reflecting on my first term as a newly qualified teacher at the Fulham Boys School, I turned to literature. I thought about Shakespeare. I thought about Austen. I thought about Virginia Woolf. But, eventually, I settled on Dickens. The following quotations – the opening lines of some of his most famous pieces of writing – seemed to me to sum up what teaching has taught me thus far…

1st September 2020. The best of times: the beginning of an exciting new chapter. The worst of times: beginning this chapter in the midst of a global pandemic. The challenges I faced starting out in teaching in 2020 were unprecedented; the rewards have been unimaginable. 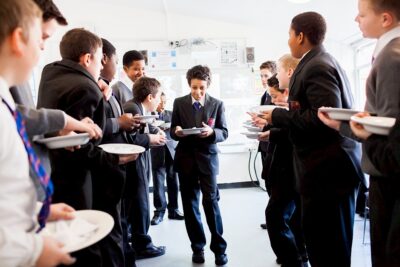 Lesson: There is always a silver lining.

Now, what I want is, Facts. Teach these boys and girls nothing but Facts.  Facts alone are wanted in life.  Plant nothing else, and root out everything else.  You can only form the minds of reasoning animals upon Facts: nothing else will ever be of any service to them.
– Hard Times

There is no question of the value of teaching facts but this year has demonstrated that much more than ‘facts alone’ are wanted in life. Never have courage, resilience, compassion and determination been more important. In his first blog of the academic year, Alun Ebenezer quoted Anthony Seldon: “Exams tell a truth about a young person. An important truth. But they do not tell the whole truth. They tell us little or nothing about the character of the young person, about who they are, or what they have to offer the world.” I have been perpetually amazed and inspired by the strength of character demonstrated by each and every Fulham boy in these most testing of times.

Lesson: Experience is our common schoolhouse.

The appearance presented by the streets of London an hour before sunrise, on a summer’s morning, is most striking even to the few whose unfortunate pursuits of pleasure, or scarcely less unfortunate pursuits of business, cause them to be well acquainted with the scene.  There is an air of cold, solitary desolation about the noiseless streets which we are accustomed to see thronged at other times by a busy, eager crowd, and over the quiet, closely-shut buildings, which throughout the day are swarming with life and bustle, that is very impressive.
– Sketches by Boz

The (very) early morning commute is an oddly beautiful experience. Walking alone through deserted, silent city streets. Watching the sunrise from an empty carriage. London at dawn, hushed and still, has a special kind of magic.

Lesson: Be an early bird.

My father’s family name being Pirrip, and my Christian name Philip, my infant tongue could make of both names nothing longer or more explicit than Pip. So, I called myself Pip, and came to be called Pip.
– Great Expectations

Pupils’ names are important. It is important to say them, use them, learn them, remember them.

Lesson: What’s in a name? Everything.

London. Michaelmas term lately over, and the Lord Chancellor sitting in Lincoln’s Inn Hall. Implacable November weather. As much mud in the streets as if the waters had but newly retired from the face of the earth, and it would not be wonderful to meet a Megalosaurus, forty feet long or so, waddling like an elephantine lizard up Holborn Hill.
– Bleak House

Prepare for the elements — especially on duty days. Always carry the essentials, no matter what season it may claim to be (waterproof coat, wind-resistant umbrella, warm gloves). London weather is reliably unreliable.

Lesson: There is no such thing as bad weather, only the wrong clothes.

Whether I shall turn out to be the hero of my own life, or whether that station will be held by anybody else, these pages must show.
– David Copperfield

Over the past year, it has become apparent that schooling is about so much more than teaching. It’s about personal growth. It’s about being part of a community. It’s about forging character. This year, ordinary people have performed extraordinary acts of kindness. Everyday existence has become a frontline. We have clapped and cheered and banged pots and pans for normal people. There is no doubt that this academic year has been tough but the ‘can do’ attitude of everyone at FBS has been truly astonishing; the school may be built on “standards, standards, standards” but there is nothing standard about it.

Lesson: We can all turn out to be the hero.